First of all, let me thank all of you that “chipped in” on the wording for the plaque that will be mounted at the entrance of the “Class of ’72 Sports & Rehabilitation Center”. We received over 30 responses, and it was quite helpful. I will post the final wording that was approved for the plaque in a separate note, along with some photos of the dedication ceremony scheduled for next month.

This e-gouge is to now ask for you to “chip-in” specifically as it relates to point #3 below.

So, I’m calling this latest effort our “chipping in” mini campaign, aimed at our 36 companies to see if we can get some of the lower participation companies to improve their ranking, and to see which company can be #1 with the most participants. The mini campaign is so named as it only takes $1.00 which can be included with a signed pledge form saying that you are donating and indicating which of the four project areas you’d like your donation to go towards.

I’ve already been in contact with the company reps, and they’ve asked for some time to reach out to many of you…and indeed we’ve already seen a few more classmates being added to the rosters. I’m now asking you to review your company’s results, and thus am providing with this memo: (1) a summary participation ranking, by company (by the way, 28th Company is in first place with 18 participants…. and 23rd Company is in last place with only one participant) AND (2) A link to the pledge form: http://1972.usnaclasses.net/wp-content/uploads/sites/17/2018/03/Class-of-1972-Pledge-Form.pdf

So, print off the pledge form, fill it out, include your dollar, and send it to the Foundation address listed on the form. We’ll keep this mini-campaign short, run it through the end of the year, and announce the results in early 2020. Oh yeah, I almost forgot… the winning company will receive for each of their participants (besides bragging rights) one of our 1972/2022 “link-in-the-chain” coins that we gave to each member of the class of 2022 last summer! 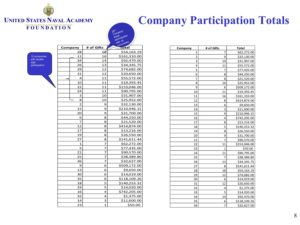